AMIR KHAN is continuing to mingle with the sporting elite after retiring from the ring.

The 35-year-old former unified world champion hung up his gloves after losing to Kell Brook in February.

Not that the Bolton fighter seems to be missing the boxing world as he is now spending time with a number of iconic names from football instead.

While using the classic fist pose, he was snapped with the likes of boss Pep Guardiola and midfielders Ilkay Gundogan and Riyad Mahrez.

He captioned the photos with: “Thank you @mancity for inviting me to your training ground. Had a lovely time meeting manager/players and watching them train.” 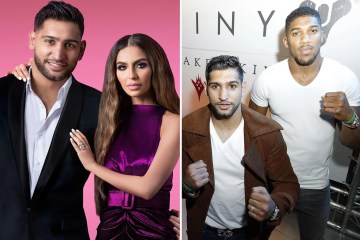 However, it seemed to be the club’s scoring sensation Erling Haaland that the Bolton Wanderers fan was most delighted to meet.

He made a separate Instagram post of a video clip that captured the moment he met the Norwegian hotshot.

Haaland towered over Khan and seemed just as pleased to meet the ex-boxing star.

It comes just weeks after Khan stunned fans when he “violated” Sir Alex Ferguson at Old Trafford – then posted a bizarre caption from Wikipedia on Instagram sharing the moment.

He enjoyed a catch-up with Fergie at the Theatre Of Dreams, in a clip also shared on Instagram.

The pair were full of smiles as they laughed and appeared to discuss their physiques.

Fergie endearingly placed a hand on Khan’s shoulder while they spoke.

But it was Khan’s reaction that shocked fans and left them jokingly claiming he violated the ex-United boss as he proceeded to rub Fergie’s belly – causing it to jiggle.

Khan was then mocked for his caption on the picture, as it was a direct excerpt from Wikipedia.

“He is widely regarded as one of the greatest football managers of all time.”