DEONTAY WILDER would knock Anthony Joshua out cold if the long-time rivals were to ever share the ring, the American’s coach has claimed.

A showdown between the former heavyweight champions is a real possibility next year as they’re both bidding to get back into the title picture.

Ex-WBC king Wilder returned to the win column earlier this month with an emphatic first-round knockout of Robert Helenius, a result his head coach Malik Scott believes he’d replicate in a Wembley war with AJ.

He told BonusBetCodes: “What makes me more excited about Wilder-AJ at Wembley in front of 80,000 is the result.

“The result is, once AJ falls, all those people are going to stand up and Deontay is going to embrace them all.” 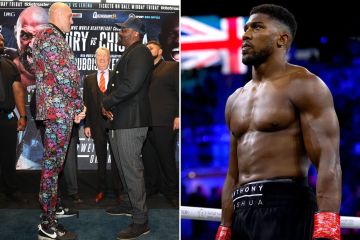 Scott said: “A disciplined Deontay is so dangerous.

“Deontay is the kind of fighter who doesn’t need to punish you before he does what he does to you.

“He creates a comfortable environment and the minute you become comfortable, we become a rude house guest. And it’s lights out from there.”

Wilder and Joshua were on course to face one another in 2018 when the pair held all the heavyweight titles.

But Bronze Bomber Wilder turned down a whopping three-fight undisputed deal worth close to £100million as he felt he was being undervalued.

The American is hellbent on settling the score by his career is over, telling The Good Fight: “Me and Joshua should have fought years ago, I could have been the undisputed champion.

“The chance isn’t gone, we are both still in the business of fighting so that opportunity will always be there.

“People still always stop me and ask when I’m fighting Joshua. Some people still think that’s the biggest fight in the world, between us two.

“It is the No1 match-up that people still always ask me about.

“It’s not a matter of ‘if’ the fight happens. It’s a matter of when, we just need the tight timing.”

He added: “We will not fall in line with Eddie Hearn’s games? They drained us.

“We dealt with Eddie Hearn for around six months and they just gave us the round around.

“They have their story, which they tell everyone, but I know the facts and he is a big manipulator.”

Winter World Cup suits me perfectly… I don’t have ANY time to get nervous, admits England wonderkid Jude Bellingham

Tyson Fury ‘piping up again’ to take the shine away from Anthony Joshua’s rematch with Oleksandr Usyk, says Eddie Hearn

What is Mike Tyson’s net worth? – The Sun