ANTHONY JOSHUA is “confident” the addition of Robert Garcia will help him exact revenge on Oleksandr Usyk in their Saudi showdown later this month.

Joshua has been cooking up an aggressive game plan for the Saudi showdown with Garcia for close to a year and believes their new approach will end the slick southpaw’s reign as unified heavyweight king.

“He knows the mistakes he’s made in the past, and he knows that he’s got to rectify them, but he’s very confident.

“I think he likes the addition of Robert Garcia, and we’re all confident for the fight.” 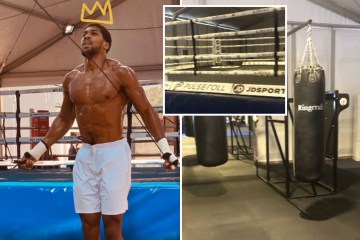 Joshua was easily turned over in his Tottenham tussle with the former undisputed cruiserweight king, who has yet to taste defeat as a professional.

And Hearn insists AJ should feel no shame if he’s outfoxed and outboxed by the smooth operator in their desert dust-up.

He told The Independent: “If you lose, you lose to a pound-for-pound No 1, and then you regroup and you go again.

“But obviously you want to win, and if he wins, I believe the Tyson Fury fight will happen.

“If he doesn’t, he goes back to being a contender again.”

Victory in the Saudi slugfest will see Joshua become a three-time heavyweight champion – but the Brit doesn’t plan on holding the belts up high for too long.

He told JD Sports: “I feel like I’m not getting looked at as someone who is a dominant heavyweight in the division.

“Because you’ve gotta learn to respect me as a person. Quote that. I’m tired, I don’t want to be respected because of the belts I hold.

“I wanna be respected because of the man you see.”