ANTHONY JOSHUA’S trainer Robert Garcia would have liked his man to have “two or three” fights before facing Tyson Fury.

Talks are progressing over AJ’s Battle of Britain bout with the Gypsy King, likely to take place in Cardiff on December 3.

Garcia, however, would have liked Joshua to step down a level before going in with Fury.

Speaking to Izquierdazo, he said: “Yes, I have spoken with Joshua’s team.

“But I am the newest member of the whole team, and they are decisions that they have to make between them. 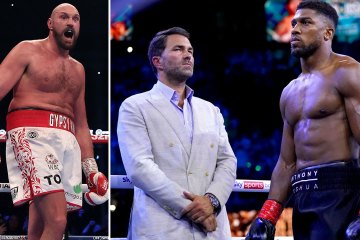 “For my part, I would like to do about two or three fights before [Fury], but obviously it is a business and a huge fight in Europe.

“I can’t stop them from taking something if it’s a huge fight and the purse I think would be a lot of money.

“I’m the newest on the team, I don’t own the decisions, they have a very smart management team and they will make the right decision and it’s their decision really.”

Garcia, 47, is eager to add training Joshua to a heavyweight title to his impressive resume – and hopes to take AJ’s camp to the US.

He added: “I told them what I think: that it would be better, and because of my work in California, I recommended doing the camp here.

“He liked the idea and they will take it into account. But for me to go back [to London] is difficult for me.

“I have a lot of work, fighters who fight every weekend.

“But I know that with my dad’s team, my son Mikey, I know I can do it and go another couple of months. I know I can, but I would rather stay. Let the preparation be here.”

Promoter Eddie Hearn offered fans a positive update about fight negotiations – but is wary that Fury is “unpredictable”.

On a similar cautious note, Garcia said: “For me, if you want to know what I think: I think Fury is doing all this to put pressure on Usyk to make the unification.

“It’s a great fight, and I also think Fury started talking. And they have talked about it with Joshua ‘s team, because they told me about it, but it could be part of the strategy of putting pressure on Usyk and thinking that he is losing the opportunity.”