ARSENAL are reportedly in talks with star defender William Saliba over a new long-term contract with fears he could walk out for FREE next summer.

However, he was made to wait until this season to make his Arsenal debut after being loaned out to St-Etienne, Nice and Marseille in the last few campaigns.

Since coming into Mikel Arteta’s side, Saliba has played a key role in keeping the Gunners tight at the back.

He has eight clean sheets in 17 games across all competitions and has conceded just 14 goals.

However, his contract is due to expire next summer meaning he could walk out for FREE. 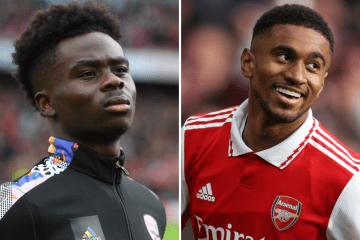 Arsenal also hold a 12-month option, but according to The Athletic, the club want to tie the Frenchman down to a new long-term contract.

Should the Gunners hit a stumbling block in negotiations, Saliba won’t be short of options.

In fact, reports suggest Paris Saint-Germain are keen on the defender.

The player loves living in France.

Arteta says when Saliba returned from loan he wasn’t sure whether their relationship was beyond repair.

The Spaniard said this month: “I was really impressed and surprised when I spoke to him.

“The way the relationship started, [I wondered] if there was damage there because he had certain expectations.

“But he was so committed just to play for Arsenal.

“If I look at how he talks about the club and how much he wants to be here, I have no doubts that he wants to continue to be here.”