ARSENAL are reportedly in pole position in the race to prise striker Victor Osimhen away from Napoli in the summer.

The 23-year-old has been heavily linked with a move away from Italy following another productive season in front of goal.

Despite spending almost two months on the sidelines with a cheekbone fracture, he has still managed to score 16 times from 26 matches in all competitons.

Mikel Arteta is desperate to bolster his attack in the upcoming transfer window with Folarin Balogun set to be the only centre-forward at his disposal.

The Gunners allowed Pierre-Emerick Aubameyang to join Barcelona earlier this year after he was deemed surplus to requirements.

Meanwhile Alexandre Lacazette and Eddie Nketiah are poised to depart when their contracts expire at the end of the campaign. 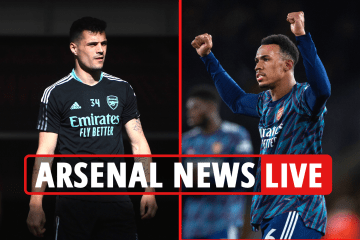 Arsenal are known to be interested in Osimhen having extensively scouted the player in action this term.

They are claimed to be battling Manchester United for his signature, with Cristiano Ronaldo, Marcus Rashford, Anthony Martial and Edinson Cavani all facing uncertain futures.

But in a boost for the North London outfit, it has been said that Arsenal are at the front of the queue to sign him.

According to Gazzetta Dello Sport via Sport Witness, Arsenal are leading the race to sign Osimhen.

They state that the club have ‘set their sights’ on the ex-Lille man, with technical director Edu desperate to thrash out a deal.

Any potential transfer is claimed to cost up to £83million.

Today is the final matchday of the 2021-22 Premier League season. It is one of the most exciting final...
Football