ARSENAL boss Mikel Arteta is set to be handed funds to strengthen in three key positions this summer.

The Spaniard has been allowed to spend £150million on new players this season, with more fresh recruits on the way ahead of next term.

According to Football London, owner Stan Kroenke will give Arteta money to spend on new players this summer.

They add that the Spaniard is after another striker, winger and central midfielder.

The goal-shy Gunners have been missing a lethal forward this season, having opted not to replace Pierre-Emerick Aubameyang in January. 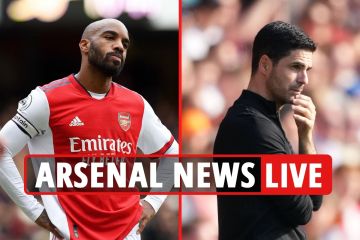 Alexandre Lacazette has netted just four goals in 25 Prem appearances, while Eddie Nketiah is without a league goal in 14 outings.

Arsenal have been linked with a number of forwards, including Alexander Isak, Dominic Calvert-Lewin and Alvaro Morata.

The Gunners have also been linked with a number of wingers ahead of the summer.

Ex-Chelsea ace Eden Hazard is among those to be rumoured, as well as Marco Asensio and Paulo Dybala.

Arsenal hold long-term interest in Wolves midfielder Ruben Neves, but will have to beat off Manchester United’s pursuit.

Other midfielders they have been linked to are more attacking than the Portuguese ace.

Lyon star Lucas Paqueta is on their radar, as is Leicester’s James Maddison.