BARCELONA could crash out of the Champions League BEFORE tonight’s match against Bayern Munich even kicks off.

And that would plunge the skint Spanish club into a further £18million black hole.

But with their Italian rivals having the early game against Viktoria Plzen, Barca know they may already be out before a ball is kicked at the Nou Camp later.

That is because Inter would move six points clear of Barcelona with a superior head-to-head record over Xavi’s side.

Therefore a win at the San Siro would guarantee their spot in the knockout stages, with Barcelona then confirmed in third because Plzen are pointless. 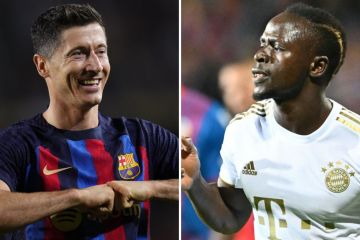 That means crisis-club Barca would drop down into the Europa League where they would face a group runner-up in the preliminary knockout round.

It would also mean back-to-back Champions League group-stage exits for Barcelona, having only done so once before – way back in 1998-99.

Barcelona’s debt stands at around £1billion and yet the club managed to spend £150m on transfer fees this summer – by selling off various parts of the club including image rights such as the stadium name to Spotify.

Their budget for this season was based upon reaching the quarter-finals of the Champions League.

However, the early exit means a reported shortfall of around £18m.

That is before the additional loss of ticket sales and TV revenue is taken into consideration, too.

However, manager Xavi confirmed the whole team would sit down in the Nou Camp dressing room this evening to see how Inter get on – rather than avoid the score from Milan.

The ex-Spain midfield maestro said: “We’ll all watch the game together in the locker room.

“The goal tomorrow is to play a good game and have good feelings, regardless of what happens in Milan.

“We have to show that we can compete with this type of teams.”

Can Wales still qualify from Group B at the World Cup?

Man Utd’s Lisandro Martinez ready to star for Argentina in Qatar at the World Cup, after adapting to Premier League life