BOXING promotions company MTK Global could be shut down TODAY after former co-founder and alleged mob Daniel Kinahan was sanctioned, according to reports.

The former advisor to Tyson Fury was named as the head of the Kinahan Cartel by the US Government recently.

The Cartel was accused of sourcing and selling ‘large quantities of cocaine from South America’ across the globe.

The business currently looks after 200 fighters.

But it’s believed an announcement from MTK Global could be made in the coming hours amid fears they could be forced to shut down. 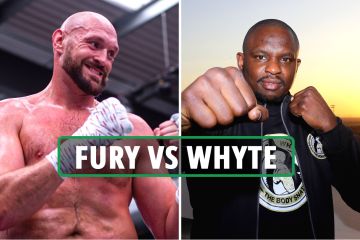 MTK Global are yet to comment on the speculation.

Irishman Kinahan, 44, co-founded the business in 2012 before allegedly severing ties in 2017.

However, Fury’s US promoter Bob Arum last week claimed Kinahan – who has no criminal convictions – was “100 per cent” still involved in the running of MTK Global.

Arum claimed he paid Kinahan – whom Fury publicly thanked for helping broker a two-fight deal with Anthony Joshua – close to £3million to help secure four fights between 2019-2021 and before the imposition of US sanction on Kinahan.

CEO Bob Yalen resigned on Tuesday due to “the pressure” from the US Government.

This is not the first time MTK Global has been placed under intense scrutiny.

The business was previously probed in 2018 after the Irish High Court named Kinahan as head of the Kinahan Cartel.

Meanwhile, Fury has claimed he has “nothing to hide” amid regarding his relationship with Kinahan.

Despite still being listed on MTK Global’s website, Fury insists he’s had nothing to do with the promotions company since 2020.

The Gypsy King, 32, was snapped with the now-sanctioned Irishman in Dubai in February, but insisted: “Because I had my picture taken with a man it doesn’t make me a criminal.

“I’m just a boxer. There could be a criminal in this building.

“I’ve got nothing to hide. The only time I’ve ever broken the law was when I got a speeding ticket.”

When asked about the drug allegations levelled at the Kinahans, Fury replied: “That’s none of my business and I don’t interfere with anybody else’s business.

“But I do know what the media can do. Remember, I was the one witch-hunted a few years back.

“Anyway, I’ve got enough problems of my own to worry about now.

“Like a big lump of a man wanting to punch me in the face on Saturday.

“Like my wife preferring that instead of being in training camp I was at home helping her with our six kids and taking out the rubbish bins, which is what I’ll be back doing on Sunday morning after this fight.”

Fury said of their professional relationship: “That only lasted from 2017 to 2020. Since then nothing. Nada.”

Former Manchester United defender Rio Ferdinand has claimed that he and Nemanja Vidic are the two best defenders in...
MMA