BRAVE Cristiano Ronaldo starts for Manchester United against Arsenal just days after the tragic death of his baby son.

The Portuguese forward missed Tuesday night’s trip to Liverpool in the wake of his devastating personal news.

He subsequently returned to training at Carrington, and has been selected by Ralf Rangnick for this afternoon’s match.

United will be without their skipper Harry Maguire, however, after a disturbing bomb threat made against him this week.

The defender is currently staying with a team-mate after being told to “quit Man United or die” by a maniac fan.

Maguire’s family are in a safe house after threats were made via email to his agent. 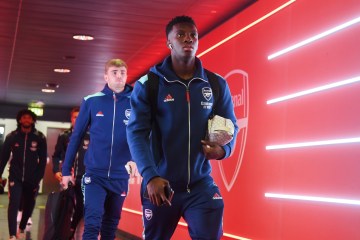 The 29-year-old was at Carrington when the threat was sent, before rushing back to be with his fiancée Fern and their two kids.

His house was searched by armed police and sniffer dogs, before being examined again on Thursday – with nothing found.

A source told SunSport: “This was taken very seriously.

“Harry and his team-mates regularly receive death threats on social media but this was different.

“The email said three bombs had been planted at his home.

“He had 72 hours to leave United or they’d be detonated. It was dripping with hatred and abuse.”

Maguire travelled with his team-mates on Friday, and has been named on the bench for today’s clash in North London.

Frenchman Raphael Varane returns from injury to partner Victor Lindelof in Rangnick’s back four – with Alex Telles also back in the XI in place of Aaron Wan-Bissaka.

David de Gea starts between the sticks, with Diogo Dalot at right-back.

Jadon Sancho and Anthony Elanga are on the flanks, with Ronaldo up front and looking to be among the goals again.

The defamation trial between Amber Heard and Johnny Depp in Fairfax, Virginia, has entered its fifth week. The court...
Football