FORMER rugby star Ricky Bibey was brutally assaulting his girlfriend in their hotel room when he suffered a fatal heart attack, it has been claimed.

Bibey, 40, was found dead at the couple’s swanky hotel in Florence, Italy, while his partner Jennie Platt was rushed to hospital with severe injuries.

Friends of Jennie and her lawyer have now claimed the estate agent was subjected to a vicious alcohol-fuelled assault by Bibey before she ran into the hallway covered in blood screaming “help me”.

She was left needing three operations and unable to speak to police for a week after Bibey’s death on July 16.

The mum-of-two has now been discharged from hospital but will need further medical treatment.

Friends of Jennie, 44, say she has been left “devastated” by the ordeal and “desperately trying to come to terms with what happened”, reports MailOnline. 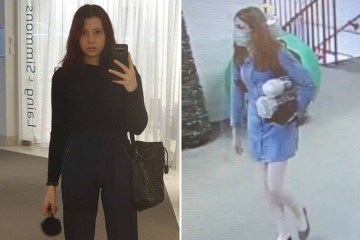 A pal told the outlet: “She (Jennie) is the victim of a shocking and violent attack in the hotel room at the hands of the man she had a long-term relationship with.

“She has been doing all she can to help the Italian authorities piece together what happened that night, speaking to them as a witness and as a victim of a domestic assault.”

The friend said the pair, from Manchester, had travelled to Italy for a “health break” at a spa as Bibey had suffered mental health issues and had experienced a “serious downturn”.

They added former rugby league player Bibey and Jennie – who had been together for three years – had been out and drank heavily the night of the tragedy.

According to the pal, Jennie – who runs her own business called Jennie Platt Sales and Lettings – suffered several serious injuries and is having to use a wheelchair as she recovers.

Jennie’s lawyer, Stefano Goldstein, said she had been the victim of a “terrible assault.”

He told MailOnline: “Jennie has explained to the police that the night Ricky died he was completely out of control and that he had attacked her.

“She has been discharged from hospital but is still in Italy as she needs a specialist medical flight to repatriate her back home where hopefully she can try and rebuild her life.”

It comes after it was reported Jennie was found semi-naked in the hallway of £350-a-night Hotel Continentale covered in blood.

A cleaner discovered her screaming for help, saw the blood-smeared hotel room, and raised the alarm.

Jennie was rushed to Florence’s Careggi hospital where she underwent surgery for a haemorrhage.

Bibey’s body was discovered lifeless on the hotel room floor, and an autopsy has revealed he died from a heart attack.

Cops are still awaiting the results of a toxicology test.

‘What’s he done to deserve that?’ – Chelsea fans mocked for their DREADFUL song for new signing Kalidou Koulibaly

BETFAIR are offering punters £30 in FREE BETS, and...
NFTNews