CALLUM WILSON is “desperate” for an England recall amid his brilliant Newcastle form, according to Eddie Howe.

The Magpies boss watched his striker notch up another two goals on Saturday as they tore apart Aston Villa.

The victory is just the latest Newcastle triumph in what is turning out to be a very encouraging first half of the season.

Wilson has more than played his part and contributed six goals and two assists despite missing a few games.

And Howe is hoping the form is enough to propel his frontman into Gareth Southgate’s thinking, with the England manager watching the game from the St James’ Park stands as he decides his World Cup squad.

Howe said: “I’m really pleased for Callum today. I’m not too aware what the players know and what they don’t know about who comes and who’s watching them. I almost think it’s better, you just play your normal game and you’re not overthinking too much. 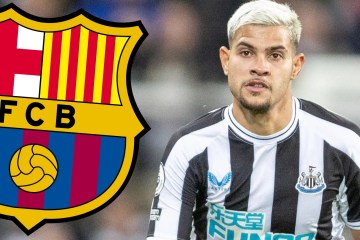 “Callum is, of course, desperate to be involved with England, it’s one of his childhood dreams, so he will be really pleased that he played so well.

“He scored the two goals and his overall performance was very good.”

Wilson’s first came from an ice cool penalty at the end of the first-half after Miguel Almiron’s shot was judged to have hit Ashley Young’s hand.

The ex-Bournemouth striker then got his second with a dinked header after a well-placed cross from his England and Newcastle teammate Kieran Trippier.

It could have been a hat-trick for Wilson but his bullet header was denied by the crossbar with 15 minutes to go.

The race to be Harry Kane’s unofficial deputy is heating up, with Ivan Toney being given his first call-up last month after impressing at Brentford.

Tammy Abraham continues to impress at Roma but has found goals harder to come by this season, while Ollie Watkins struggles for form at Villa.

Southgate will name his squad in the coming days.

Liverpool vs Man City – Community Shield: Get £20 bonus with Coral