CHELSEA are confident of sealing the transfer of Frenkie de Jong, according to reports.

And talks with Barcelona are said to be “hurried” as they look to try and get the deal over the line ahead of the new season.

De Jong, 25, has been at the centre of a long saga all summer.

Manchester United were desperate to sign him but De Jong snubbed their approaches, despite Barcelona accepting a bid of around £72million.

The Catalan giants need to make money soon due to their financial disarray and gave De Jong an ultimatum to lower his wages or leave the club.

But with the Red Devils unable to offer Champions League football this season, Chelsea are trying to swoop. 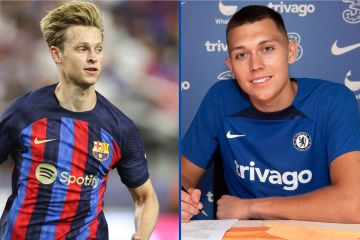 According to Sport in Spain, negotiations are underway and De Jong is thought to be more open to making the switch to Stamford Bridge – whereas he was reluctant to head to Old Trafford.

Barcelona are continuing to demand the same fee agreed with United.

However, any deal could include targets Cesar Azpilicueta or Marcos Alonso going the other way to the Nou Camp.

Thomas Tuchel’s side get their new campaign started at Everton on Saturday evening.

So the German manager would love to have the midfielder sign before then to meet and possibly even train with his new team-mates.

He has publicly voiced his frustration at the squad not being ready for the season – especially after the transfer for Jules Kounde fell through while other targets such as Marc Cucurella and Wesley Fofana have not signed yet either.

However, despite their salary threats to the player, Barcelona have insisted they do want De Jong to stay after all – which could scupper a deal entirely.

President Joan Laporta told CBS: “The first thing to say is we want Frenkie to stay at Barcelona. We love the player and him as a human being.

“I want him to stay at Barcelona. He’s a high-quality player and a good guy. I also know that he wants to stay.

“In football, you never know. I can’t say categorically. It all depends on the different parties.

“But in principle, I can say there is a strong possibility he stays, and I can say as president I will do my best for him to stay at Barcelona.”

Erling Haaland at centre of three-way boot sponsorship deal between Nike, Adidas and Puma – wearing each in recent weeks

MANCHESTER UNITED have offered Casemiro the opportunity to DOUBLE...

MANCHESTER UNITED'S dire transfer window has been well documented. But...

ARSENAL new boy Oleksandr Zinchenko stood out in one...

Erling Haaland at centre of three-way boot sponsorship deal between Nike, Adidas and Puma – wearing each in recent weeks

THREE of football's biggest boot manufactures are battling to...
NFTNews