EMERSON PALMIERI is returning to Chelsea but has no idea if he figures in Thomas Tuchel’s plans.

The Italian international left-back has just completed a season at Lyon after Tuchel failed to cut short his loan deal in January.

And with Marcos Alonso looking to quit Chelsea this summer, the door could finally open for Emerson to make his mark at Stamford Bridge.

The Brazilian-born 27-year-old cost £17.5million when he was signed from Roma by Antonio Conte in January 2018.

But he has never been a major player for subsequent managers Maurizio Sarri, Frank Lampard or Tuchel and has not started a Premier League game since January 2020.

Yet he remains a regular pick for Italian national boss Roberto Mancini and was part of the team which won last summer’s Euros final against Italy. 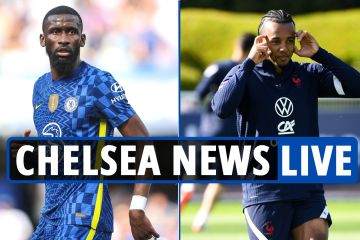 He says: “It’s been a good season for me personally because I played a lot of games for Lyon but I haven’t spoken to the coach at Chelsea.

“I still have a contract with Chelsea and if I need to go back then I’ll be happy to do that because it’s a good club and a good place for me.

“I played there for three years and won some trophies. I have a lot of friends at Chelsea but I don’t know what the plan is.”

Emerson managed just four minutes off the subs bench in Chelsea’s opening league game of last season before being sent on loan to Lyon.

Tuchel tried to recall him when Ben Chilwell suffered a season ending knee injury in the Champions League game against Juventus in November.

But Lyon refused to rip up their loan agreement and Emerson says: “There was a conversation between the clubs and Lyon said no.

“I didn’t have any say in the matter but I respected the decision because I signed for Lyon for one year, not for six months.

“It was nice to know that Chelsea wanted me back so now I am returning for pre-season and let’s see what happens after that.”