EMPTY seats were on show all around Stamford Bridge during the London derby between Chelsea and Arsenal as the Blues felt the pinch of the sanctions on them.

As a result, only season ticket holders were able to support their team against the Gunners on Wednesday night.

When asked in his pre-match press conference about the prospect of the stadium not being full, Chelsea manager Thomas Tuchel admitted: “I was not aware of it.

“Maybe someone told me and I forgot it. But let’s turn things around.

“Maybe everybody can push a little bit more because we lack quantity but should not lack quality of support. 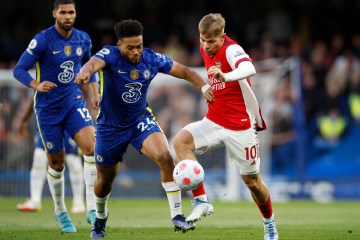 “Hopefully, we can be the spark to bring everybody into the kind of mood to give a little bit more than normal.”

It was a strange atmosphere given the magnitude of the game as Arsenal looked to re-energise their top four bid.

And the visiting fans taunted the Chelsea faithful with chants of “Just like the old days, there’s no one in here”.

To which the Blues fans responded “Champions of Europe, you’ll never sing that”.

The Gunners came into the match having suffered three defeats on the bounce.

Losses to Crystal Palace, Brighton and Southampton left their Champions League hopes in tatters as Tottenham became the favourites to secure fourth place.

But Spurs’ defeat to Brighton at the weekend has given Arsenal renewed belief they can still secure Champions League football.

Meanwhile, Chelsea are bouncing after their FA Cup semi-final win over Crystal Palace at Wembley on the weekend.

The Blues look set to finish third in the Premier League but could still finish the campaign with a major trophy if they beat Liverpool on May 14.

ALEX TELLES could be sent back to Porto by incoming Manchester United boss Erik ten Hag. The Dutch tactician is...
MMA