CONOR BENN has given up his boxing licence with the British Boxing Board of Control finding him guilty of misconduct after failing a drugs test prior to his postponed fight with rival Chris Eubank Jr.

The 25-year-old failed a drugs test ahead of the scheduled early October fight, with traces of a female fertility drug were found in his system.

He returned an adverse finding for clomifene, which is commonly used as medication to treat infertility in women who do not ovulate.

But it can also increase testosterone levels in men, which is why it is on the World Anti-Doping Agency banned list.

The BBBoC stepped in and declared the scrap is prohibited under their sanctioning, despite BOTH Benn and Eubank Jr wanting to continue with the bout.

Benn insisted he was a “clean athlete” in the aftermath of the drugs scandal and vowed to clear his name. 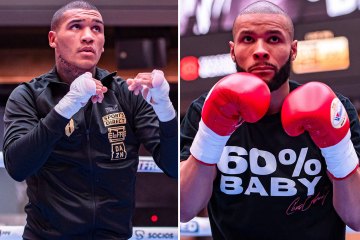 But prior to a hearing, Benn “voluntarily relinquished” his licence with the BBBofC and the allegations of misconduct were upheld.

An official statement read: “By a notice dated 17th October 2022, Mr. Conor Benn was called by the Board of the BBBofC to attend a hearing dealing with allegations of misconduct pursuant to Rule 25.1.1.

“On the morning of the hearing, Mr. Benn voluntarily relinquished his licence with the BBBofC.

“In accordance with its Rules and Regulations, the Board determined the allegations following the hearing at which Mr. Benn was legally represented.

“The allegations of misconduct against Mr. Benn were upheld.”

Gimnasia stadium chaos could have been prevented if a nearby stadium with bigger capacity was used, as blame game begins