CONOR MCGREGOR has jokingly claimed he’s weighing a whopping 265lbs after more than a year of lifting weights.

The UFC’s poster boy has made the gym his home during his near 16-month recovery from the horrific broken leg he suffered in his trilogy fight with Dustin Poirier.

McGregor’s frame is significantly bulkier than it was going into his Sin City showdown with The Diamond.

And during an impromptu Instagram Live, the former two-division champion claimed to be at the UFC’s heavyweight limit after being quizzed about his weight by former middleweight title challenger Yoel Romero.

In response to Romero’s question, the Irishman said: “I don’t know, mate. But big! Big anyway. 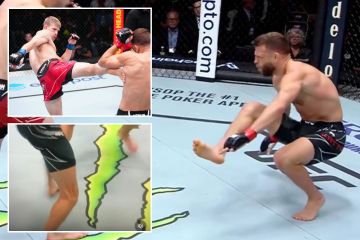 McGregor, of course, was joking about becoming a 19-stone behemoth – which, if true, would see him weigh more than WBC heavyweight champion Tyson Fury.

The Notorious is currently in the Dominican Republic filming his scenes for the upcoming Road House remake with Jake Gyllenhaal.

But he plans to shift his focus back to fighting as soon as he wraps up filming – with a return to the octagon early next year at the forefront of his mind.

“Early 2023 I’m aiming for. Sometime in that first quarter.

“That will give me a good couple of months [to prepare].

As it stands, McGregor won’t be back until April at the earliest as he’s currently out of the United States Anti-Doping Agency’s testing pool and has yet to be tested in 2022.

USADA requires UFC fighters to be enrolled in their year-round testing programme in order to compete in the octagon.

Fighters who have left the pool due to retirement or other reasons are required to be in it for a minimum of six months before competing again.

USADA and the UFC, however, do have the power to waive the six-month testing pool requirement in “exceptional circumstances or where the strict application of that rule would be manifestly unfair to the athlete.”

McGregor, however, would have to pass two drug tests before being granted an exemption.