CONOR MCGREGOR has been pictured looking ripped as he endured a tough workout while wearing an expensive Patek Philippe watch.

The UFC star is not set to return to the ring until 2023 but that has not stopped him putting the hours in at the gym.

He is currently pre-occupied with making a splash in Hollywood with the Irish fighter featuring in a remake of the Road House movie.

He revealed the filming was taking up as much as 17 hours a day.

McGregor took to Instagram to show off his gym routine and shared several pics to give an insight into his gruelling routine.

The 34-year-old is pictured looking sweaty as he pumps iron in a tight white vest. 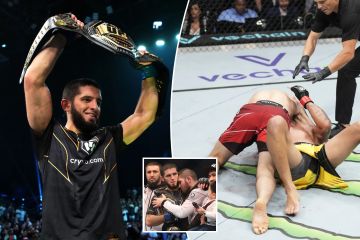 McGregor’s arms almost burst out of the picture as the fighter packs on the pounds ahead of his return to the Octogon.

The images also show him sporting a shiny Patek Philippe watch as he does the workout.

The watch is valued at £80k and McGregor flashes it in one of his pictures.

In his caption, he writes: “17 hour days filming then straight to the gym before going home.

It was announced in August that McGregor would be making his film debut as he explores life outside fighting.

McGregor will be featuring alongside Jake Gyllenhaal in a reboot of the Patrick Swayze classic Road House.

Filming began on August 23 and the Amazon Prime produced movie is set to be released in early 2023.

The movie follows the story of James Dalton, who plays a bouncer on a mission of cleaning up a rough bar.

It is not yet known what role McGregor will play and whether it will be fictional or as himself.

He is set to return to fighting in 2023 as he looks to bounce back from his last fight against Dustin Porier, when he suffered from a broken leg.

UFC legend Conor McGregor is worth £120m thanks to Proper No. Twelve whiskey business and hefty fashion line – The Sun

Carla Esparza: Rose Namajunas ‘lost the fight to herself’ at UFC 274, ‘you can’t win a fight by defending’