JAKE PAUL has told Conor McGregor to fight him instead of Floyd Mayweather as it’d be “way bigger and more entertaining”.

The Notorious is 0-1 in the boxing ring after losing to Mayweather via tenth round knockout in 2017.

McGregor, 34, has been linked with a return to the squared circle after sliding to three defeats in his last four MMA bouts.

A sensational rematch with retired 50-0 star Mayweather has been touted, but Paul believes it should be him that gets to welcome McGregor back to the boxing ring.

Speaking to DAZN Boxing Show, the Problem Child said: “Me vs Conor McGregor is a way bigger fight (than Mayweather). 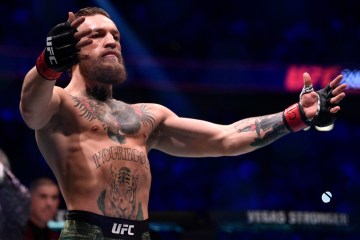 “That’s the one everyone really wants.”

Paul, 25, is undeterred despite being insulted by McGregor after his last callout.

Appearing on the MMA Hour, the American had claimed: “I think for me, fighting a couple more times, continuing to knock some people out, and he has to get active again, who knows when that’s gonna happen?

“I think those two things need to happen, and then at some point, it’s gotta happen.

McGregor responded by calling Paul a “flop” and a “nobody”.

He further belittled Paul by tweeting: “You’ve [had] 2 fights and done 70k buys.”

Paul is currently without an opponent after seeing two August 6 bouts fall through.

His Madison Square Garden card has been cancelled altogether following the withdrawals of Tommy Fury and Hasim Rahman Jr.

The YouTuber-turned-boxer has been called out by Chris Eubank Jr – who at middleweight weighs three stone less than him.

McGregor, meanwhile, teased that he’d be back in the octagon soon in a Twitter voice note after UFC 277, saying: “I’m buzzing ’cause I want to come back.

“Thank you all so much for the entertainment and I’ll see you real soon.”

BARCELONA reportedly paid about £126milion of their own money...

KSI has called out Jake Paul for a Wembley...