The Portuguese superstar, 37, stormed down the tunnel with a handful of minutes remaining in the game.

And The Athletic are now reporting he left the ground altogether before the match came to an end.

However, his absence did not spoil the dressing room celebrations as the players enjoyed a “vibrant” post-match party.

United boss Erik ten Hag had used just three of his five permitted subs but Ronaldo was not hanging about.

Ten Hag said: “We will deal with that on Thursday. I saw him leaving but I didn’t speak to him after. 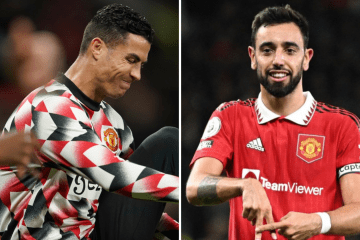 “I don’t pay attention to that, we want to focus on this team, it was a magnificent performance from all 11 players.

“Tonight we celebrate the result and the rest we deal with on Thursday.”

Ronaldo’s incredible sulk took the shine off what Ten Hag felt was the best performance of his reign at Old Trafford.

The United chief was also asked whether Ronaldo, 37, had permission to head for the dressing room early.

The Dutchman said: “In answer to your question, we deal with that on Thursday and what we have seen tonight was 11 players who defend, 11 players who attack. There was a lot of dynamic in the attack as well.

“I have to mention, I said 11 players, I have to correct myself, it was a performance also from the subs who came on who had a good role.”

Ronaldo was slammed for his reaction to being subbed early in Sunday’s goalless draw against Newcastle — and also threw a strop at Brentford in August.

After a pre-season clash with Rayo Vallecano at Old Trafford, he even headed home early after being replaced at half-time.

Ex-England defender Danny Mills said: “If he has done that, it’s an absolute disgrace.

“I think that’s disrespectful to the team, to the manager, to the fans.

“They’re winning 2-0. What complaint can he have? If they were losing 2-0, it still wouldn’t be right but I would sort of understand it.

“He clearly thinks he’s bigger than the club.”

Second-half goals from Fred and Bruno Fernandes gave United an impressive win — which would have been more convincing but for Tottenham keeper Hugo Lloris.

Ten Hag said: “It was the best team performance so far this season, we are developing.”

Spurs were lucky not to be on the wrong end of a hiding, with boss Antonio Conte worried about how they match up to the top clubs.

He said: “I have to be honest and first of all this was not the first time for us, despite the table is good, but every time we played a high level game we struggle.

“I hear people say that we are title contenders and I think we need time.

“It is right to analyse with the club why, when we play this type of game where the level is very high, we struggle.”