CRISTIANO RONALDO is poised to return to Manchester United’s squad for this weekend’s trip to Arsenal.

The superstar forward missed the game against Liverpool in midweek after being granted compassionate leave following the tragic death of his baby son.

But interim boss Ralf Rangnick has confirmed Ronaldo is available for the Premier League clash at the Emirates on Saturday.

On Monday Ronaldo confirmed that his newborn son had died after partner Georgina Rodriguez gave birth to twins.

He was granted leave by the club to be with his family, before returning to training on Wednesday.

Ronaldo then spoke of being “home sweet home” as he posted a picture with his family after partner Georgina returned home from the hospital. 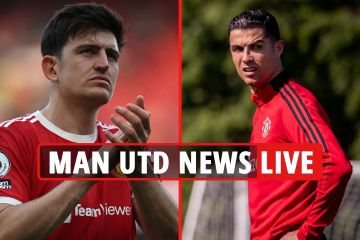 And now he is set to make his match comeback less than a week after the heartbreaking news.

Manchester United and Liverpool fans came together as one at Anfield on Tuesday with an emotional minute’s applause for Ronaldo following the tragedy.