PAUL POGBA could be set for an awkward return to Old Trafford after Juventus’ Champions League humiliation.

And that could also mean a reunion for Cristiano Ronaldo with his old side.

Juve were dumped out of the Champions League after five group games last night.

They lost 4-3 in a thrilling match away at Benfica.

That saw Benfica join PSG on 11 points each while Juventus are way back on just three, level with Maccabi Haifa.

The Old Lady therefore cannot qualify for the knockout stages. 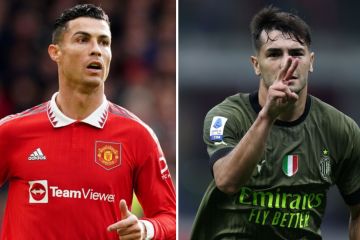 But should they avoid defeat in their final Group H game against Maccabi, they will finish third and be relegated into the Europa League.

There, Juventus could face Manchester United early in 2023.

Erik ten Hag’s side are currently second in Group E behind Real Sociedad.

Should they finish as runners-up, they could face Juve in a blockbuster preliminary knockout round tie.

However, a meeting later on in the knockouts – potentially even in May’s Budapest final – could happen instead.

Pogba, 29, left United in the summer when his contract expired, ending six turbulent years as a Red Devils man following his £89million transfer back from Juventus.

There was little love lost between the player and the club after his constant underperformance.

However, he endured a nightmare start to life back in Turin and has been out with a knee injury since pre-season, leaving him battling to be fit for the World Cup.

But with the 37-year-old’s contract expiring in the summer, his future remains unclear – especially after trying to force through a transfer exit and then defying his manager’s orders by refusing to come on as a substitute against Tottenham before leaving the stadium before full-time.

After a suspension and £720,000 fine, Ronaldo returned to first-team training on Tuesday and is likely to be involved against Moldovan side Sheriff Tiraspol tomorrow.