DEONTAY WILDER’S boxing return could be announced NEXT WEEK with with Robert Helenius one of “several” names in talks.

Wilder’s career was left in doubt last October following a gruelling defeat in his epic trilogy bout with Tyson Fury.

But recently, the American has been captured training again and was seen bumping into Francis Ngannou, 35, at a UFC training facility.

His manager Shelly Finkel has now revealed an agreement for Wilder’s comeback fight is edging closer and could even come next week.

Finkel told SunSport in New York: “Spoke with him on Tuesday, he couldn’t be happier.

“He’s having a great time and he’s getting more attention now than ever before. He’s out in Vegas training and he’s very happy. 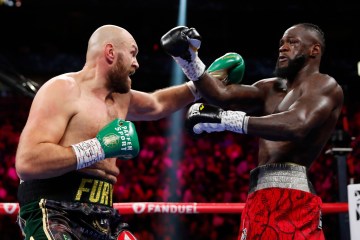 “He’s at the UFC gym training, we’re not exactly sure where the next fight will be yet but I would hope to have that together in the next week or so.

“I think next week we’ll probably have an agreement and then an announcement.”

Wilder, 36, was knocked out in round 11 against Fury, 33, after being floored three times but scoring two knockdowns of his own.

The ex-WBC champion then went radio silent, leaving his boxing future in doubt.

But talk of a return soon surfaced as Wilder was seen publicly again and now back in training.

But Finkel has clarified a deal with the Finish heavyweight, 38, has not been struck, although they remain in talks.

He said: “There’s nothing done.

“What happened on that, Frank and I are pretty close, and Frank said to me, ‘Are you looking at Helenius as one of the people as one of the ones you’re looking at? As I’m interested in him for Daniel Dubois’.

“I said, ‘Yeah, I’m interested in him for Deontay.’ Then, all of a sudden he tells people that. And that’s how that all started.

“At this moment, he’s just one of several we’re looking at.”

Finkel added that Wilder’s targeted return date is in the last quarter of 2022, meaning he will fight before the year is over.

Who is Lee Westwood’s wife Helen Storey, and will she be his caddie at The Open? – The Sun