Rosenior is tipped to stay at Pride Park in another role as he continues talks with club chiefs.

The Rams’ decision has surprised a few people as they sit only one place outside the League One play-off spots following relegation.

The Millers have been anxious to tie down Warne to a long deal after he took them back up last term and won the EFL Trophy.

And just days ago the 49-year-old denied being approached by second-tier rivals Huddersfield about their vacancy. 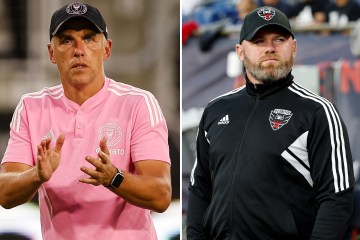 But this time the talk seems more serious, with suggestions he is Derby’s favoured choice.

Rosenior, 38, might feel a bit bemused to be eased out of the top position so quickly, even though his appointment was only temporary.

With only five contracted players in the summer, he helped recruit 14 newcomers over the summer and guided the Rams to eighth.

Derby have lost just three of his 12 games in all competitions, but all three defeats have come in League One.

And local businessman David Clowes, who completed his takeover just after Manchester United legend Rooney quit, was always clear he planned an overhaul.

Warne is tipped to come in, despite being linked to Cardiff as well as Huddersfield.

Is Tottenham vs Roma on TV? Live stream, kick-off time and team news for HUGE pre-season clash in Israel