MANCHESTER CITY superstar Erling Haaland had a funny encounter with Borussia Dortmund staff in the tunnel after his late winner.

Haaland delivered a crushing blow to former club Dortmund’s hopes of a surprise point at the Etihad on Wednesday as he helped City come back and pick up a 2-1 victory.

The Bundesliga giants opened the scoring with England international Jude Bellingham on 56 minutes before John Stones equalised in the 80th minute.

The star striker then turned from Dortmund hero to villain four minutes later as he registered his 13th goal in just nine matches with the Premier League champions.

The Norway international then met some of the visitors’ backroom staff in the tunnel after full-time.

That is when the 22-year-old sheepishly told his former coaches not to take their anger out on him. 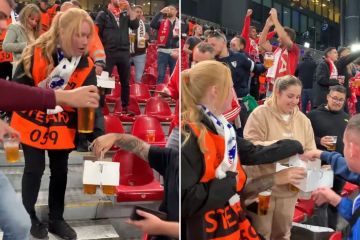 Haaland said in front of the BT Sport cameras: “Don’t beat me up.”

Haaland joined Dortmund from Red Bull Salzburg in 2020 after snubbing a move to Manchester United.

The Norwegian star enjoyed tremendous success at the Signal Iduna Park as he amassed a stunning total of 86 goals and 23 assists in just 89 matches.

That led to a major £51million move to City in the summer transfer window.

There was talk Dortmund would know how to limit their former star after training him in the last two years, with Nico Schlotterbeck insisting he knows how to stop him.

But the centre-forward is adamant his former team-mates weren’t successful.

Haaland told BT Sport: “They didn’t stop me, I scored! But yeah, they played well, and I was quite sure I was going to be followed the whole game because they know me very well.”