EDDIE NKETIAH fired Arsenal to a HUGE 4-2 victory over Arsenal as they injected much-needed life into their top four challenge.

Youngsters Bukayo Saka, Eddie Nketiah and Emile Smith Rowe impressed but Ben White struggled to cope on the right side of the Gunners’ defence on a difficult night for the England international.

Perhaps should have done better with Timo Werner’s effort despite the wicked deflection but couldn’t do anything about Cesar Azpilicueta’s smart finish.

His distribution when playing out from the back remains one of the best in the league. 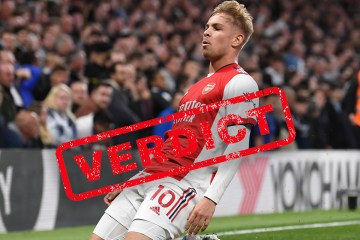 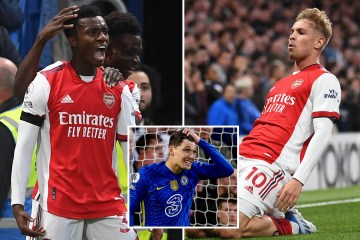 Appeared to be part of a back three early on but that quickly shifted to a four as White moved to right-back.

Was sometimes guilty of being bullied by Romelu Lukaku although he did also give it back to the Belgian.

However, he was constantly barking orders at Holding and Tavares either side of him so may well be the leader Arteta needs back there.

Looked a yard or two off the pace when Werner, Lukaku and Mason Mount were buzzing around him.

Seemed to struggle coping with the ferocious nature of the match and the speed at which Chelsea poured forward, but still probably looked a little more composed than Gabriel alongside him.

Offered Arsenal the width they required and linked up nicely with Smith Rowe and Nketiah when the striker drifted wide to overload the left.

Allowed Azpilicueta to get in front of him too easily for Chelsea’s second goal.

Had the misfortune of deflecting Werner’s shot beyond his own keeper to get Chelsea back into the match.

Put in a lot of leg work to try and keep up with N’Golo Kante, Ruben Loftus-Cheek and the floating Mount.

Didn’t catch the eye but actually had quite an effective game in the middle.

Started only his second Premier League game of the season in a surprising addition to the Arsenal line-up.

Did not stick out as someone who was as rusty as he could have been.

Tormented Marcos Alonso whenever he faced him up one-on-one – his pace, skill and trickery simply too much for the Spanish defender.

Had him on toast all evening and then got his reward with the penalty at the end.

Had a running battle with Kante man marking him all evening but was still able to pull the strings wonderfully.

One of Arteta’s most important players for the way he is trying to play. Able to carry the ball and link with the attack and then has an elite level of creativity when around the box.

Took his goal absolutely superbly after a quiet opening 25 minutes.

Then could have netted a breathtaking equaliser after some dazzling footwork, only to curl his effort narrowly wide.

Leading the line instead of Lacazette, the 22-year-old striker gave Arsenal what the Frenchman so often lacks – goals.

He took his golden opportunity in the first half with an impressive amount of composure and – with a bit of luck – may have had a couple more before the break.

Also linked the play as well as Lacazette does, before nicking Arsenal’s third of the evening as he pounced in Chelsea’s hapless defending.

Scored as many Premier League goals from open play this evening as Lacazette has managed all season – two.

Gave Arsenal exactly what they needed as the game became even more stretched in the latter stages.

Provided the Gunners with the pace to hurt Arsenal and could have scored if he had been a yard closer to Mendy when the ball rolled across the box.

Did his job solidly enough when he came on. Shored things up when Arsenal needed a bit of extra steel.

Came on for Saka in stoppage-time after his strike replacement Nketiah had netted twice to put his place in the side under threat.

For one of the latest NBA rumors, the Lakers are not budging on 76ers coach Doc Rivers. The front...
Esports & Gaming