ENGLAND crashed to a humiliating, rain-affected defeat against Ireland and now their Twenty20 World Cup plans are in tatters.

If Jos Buttler’s team lose to Australia on Friday, they will almost certainly be knocked out of the tournament at the Super 12s phase.

England bowled badly in their first ten overs and then struggled with the bat against a useful Irish attack.

England lost by five runs under the Duckworth-Lewis-Stern method and nobody could say that Ireland didn’t deserve their victory.

Moeen Ali knew England were behind and hit spinner Gareth Delany for six, two and four from the first three balls of the 15th over. But then more heavy rain arrived and the umpires took off the players with England still behind. 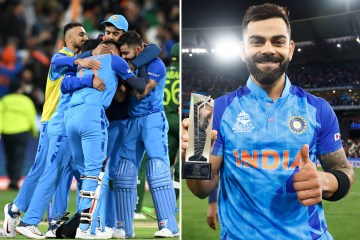 England’s chase started to go wrong when Buttler was caught behind from the second delivery of the innings and the rest of their much-vaunted batting line-up continued to struggle on a pitch offering assistance.

And it might have been even worse for England if the Irish had not dropped three relatively straightforward catches.

Ireland’s win brought back memories of their win over England in the 50-over World Cup in India in 2011.

Fast bowler Mark Wood admitted that England were way below the necessary standard in the field.

Wood said: “I didn’t think I bowled very well, to be honest. It was a bit wet and greasy and I was worried about where I was landing.

“I thought for the first ten overs we were a bit flat and lacking intensity. Liam Livingstone came on and did well, taking three wickets, but we weren’t at our best today.

“We gave the Irish batsmen too many four balls. It is a big stadium and there wasn’t a big crowd, maybe that’s why we lacked intensity.”

And skipper Buttler added: “We were really poor in the first ten overs, we let Ireland get away. We weren’t consistent enough. We had everything in our favour bowling first with bad weather around. We needed people to stand up and we never showed that.”

Irish captain Andrew Balbirnie made 62 and Lorcan Tucker was going well with 34 from 27 balls when he was run out at the bowler’s end when Adil Rashid deflected the ball onto the stumps.

Ireland’s innings disintegrated after that with Wood and Livingstone bowling taking three wickets.

England beat Afghanistan in their opening match but can afford no further mishaps against Australia, New Zealand and Sri Lanka.

Was Making Conscious Effort To Strike At A Higher Pace, When We Lost Wickets Our Plans Changed – Virat Kohli

Indian T20 League 2023: Five openers who can earn big at the mini-auction for the next season