The 28-year-old dazzles with shots which appear to be taken from within an arcade.

And fans are loving all the fun and games with the sizzling OnlyFans model as she poses for the camera.

Wearing only a pink and light blue bikini and knee-high socks of the same length, VanZant shows off her incredible figure.

In one picture posted to Twitter, the former Octogon fighter sits with her arms behind her head looking alluringly into the camera.

In another, plenty of skin is on show when VanZant leans over a game machine. 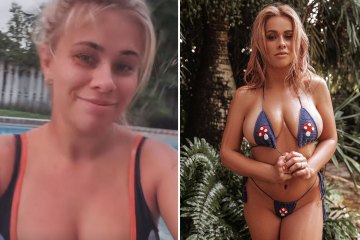 And fans get glimpse of her wonderful figure from up close as the camera closes in on the star as she leans forward on another arcade game.

It’s just the latest in a series of sizzling snaps that the model has treated fans to in recent weeks.

Earlier this week, the star showed off her incredible figure in a tight black bikini.

Her Instagram fans were treated to pics of the star lounging in the hot tub.

And in an interesting change of pace, Vanzant also wowed her social media followers with a braless all-white photoshoot that left jaws on the ground.

VanZant was a UFC fighter from 2013 to 2020 and quickly became popular with fans.

Since 2020, she has been competing in the equally brutal Bare Knuckle Fighting Championship.

Eugene Bareman impressed by Max Holloway: ‘Max showed me, in that second fight, something that I didn’t think he was capable of’

‘This is a disgrace’: MMA world reacts to Charles Oliveira missing weight, being stripped of UFC title