Ex-UFC fighter Paige VanZant has sent fans wild with a busty poolside display as she enjoy a dip with her husband.

The pair packed on the PDA again as they relaxed together and flaunt edtheir love in several Instagram pics.

Unlike husband Austin Vanderford, VanZant moved on from the sport two years ago.

But she clearly still knows how to steal attention even outside the octagon.

The 28-year-old stunner showed off her amazing figure as she posed in the pool in a tight black bikini.

Later images showed the two embraced in a passionate kiss with Vanderford wrapping his arms around her. 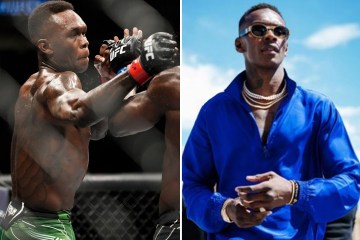 VanZant’s hubby showed off his impressive array of tattoos.

Vanzant, who has over three million Instagram followers, captioned the pictures: “Mine.”

The series of photos left fans blown away.

VanZant often takes to social media to share stunning pics with followers and left jaws hanging with one incredible snap of herself in the bath last month.

The beauty was a UFC fighter from 2013 to 2020 and quickly became popular with fans.

Since 2020, she has been competing in the equally brutal Bare Knuckle Fighting Championship.

Meanwhile, husband Vanderford continues to fight in the octagon and is highly-rated in the middleweight division.