The 37-year-old pulled up in a striking green outfit, while also donning black boots and shades.

Hamilton, 37, made the appearance after last weekend’s second-place finish at the United States Grand Prix.

The seven-time champion led for much of the race, only to be picked off by Max Verstappen’s far speedier Red Bull with six laps remaining.

His latest result means that, while performing well in his Mercedes, Hamilton is running out of time to extend his run of having won a race in every season of his career.

He will have three more shots at it, starting at this weekend’s Mexican Grand Prix. 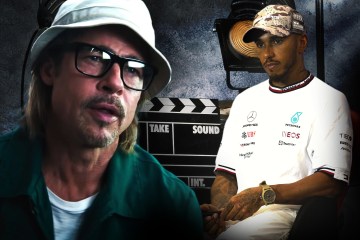 Following that will be Brazil and Abu Dhabi next month.

Off the track, Hamilton has launched his own film and TV company.

As reported by DEADLINE, Hamilton’s new company will be called Dawn Apollo Films.

The first of two upcoming projects will see a thus-far untitled F1 film from Top Gun: Maverick director Joe Kosinski that will star actor Brad Pitt, while the second one will be a documentary detailing Hamilton’s personal journey.

Gearing up for his new role, Hollywood superstar Pitt was in attendance at the US Grand Prix last weekend.

After launching his new venture, Hamilton told DEADLINE: “I’ve always been into movies. I watch a lot. I find it a real escape. There are a lot of movies I find inspiring…

“The goal is to make impactful stories and ultimately to inspire people through movies and storytelling.

“A big part of the new company will be about social impact, community and causes.”