The former Manchester United pair were post-match pundits for the Red Devils’ 1-0 win over West Ham at Old Trafford.

And as the cameras cut back to presenter Dave Jones to sign off the show, Neville had put on his ex-teammate Saha’s cap and specs.

Jones, Saha and Jamie Redknapp were all left thoroughly amused by the former England right-back’s appearance.

And Neville was asked to stare straight down the camera to give the viewers a good look at his new style.

But it’s safe to say it is not one which impressed those on social media. 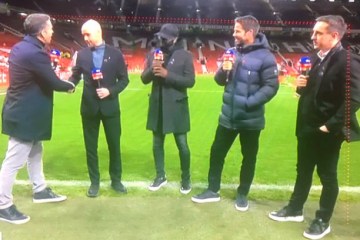 One said: “Nev looks like he’s crossed between a roadman and a Peaky Blinders member.”

While a fourth added: “Stinks of a Jamie Carragher profile picture, that.”

The funny moment between Neville and Saha came after fans picked up on the duo, Redknapp and Jones all wearing the same shoes.

They each wore casual blue trainers with a white rim, although it is unclear whether it was planned or simply a coincidence.

Meanwhile, United’s slender win over West Ham took them back up to fifth in the Premier League table, one point behind fourth place Newcastle with a game in hand.

They travel to Real Sociedad in their final Europa League group stage match on Thursday, three days before a trip to Aston Villa in the Premier League.

They then take on Villa again in the Carabao Cup, before their final pre-World Cup match is a trip to Craven Cottage to take on Fulham.