YOU don’t know what you are shoeing!

Fans were stunned to see Sky Sports pundits all toeing the same line with identical footwear at Manchester United’s 1-0 win over West Ham.

They wore comfy-looking casual blue trainers with a white rim

And one armchair viewer posted: “What the hell is going on with the footwear on sky sports??? All the same shoes!!!”And another asked: “

Another asked: “Where do pundits buy their pundit shoes?” 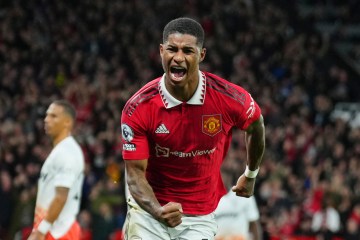 One follower of footwear fashion wrote: “I never knew Sky Sports had their own brand of shoes.”

A similarly-stunned observer expressed relief: “You all got the message about the shoes then.”

It remains a mystery whether the shoe love-in resulted from the pundits having the same trainer thought or was just a freaky coincidence.

Something of a shoedunit, in fact.

But viewers were not impressed.

As Sky’s experts analysed the game, fans assessed their feet – and decided the matching footwear was a toe-curling effort from the four of them.

Another posted: Pundit shoes out in force tonight.

Another wondered: “Has a Sky Sports commentators shoe sponsorship deal been announced that we’ve missed?”

So the clear message to the pundits? Do a shoe-turn and wear what you like.

Anthony Joshua needs to rough up Oleksandr Usyk so badly in match he nearly gets DISQUALIFIED, advises David Haye

Watch Floyd Mayweather, 45, training in $1,000-a-night hotel at 2am as rules for boxing legend’s exhibition are revealed