WEST HAM have come under fire on social media due to their “vile” orange kit against Manchester United.

The Hammers take on United at Old Trafford in the Premier League and David Moyes’ men are donning their third kit.

The East Londoners are competing with a half-white and half-orange shirt, an appearance that hasn’t gone down well with the fans as they took to social media to voice their disapproval.

Some even think West Ham’s shirt looks like the Kinder chocolate design.

Another posted: “That West Ham kit is vile.” 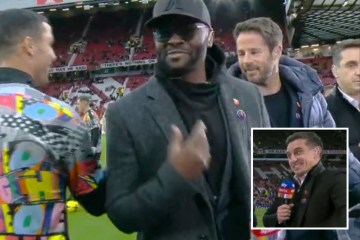 A third wrote: “Is West Ham United going for the “Most Bland Kit” award this season?”

This fan said: “As a West Ham supporter, what on earth is the orange and white away kit all about.”

Another one tweeted: “That West Ham kit is bloody horrendous.”

This comes after a dramatic few weeks that saw Ronaldo getting omitted from Ten Hag’s squad after he refused to come on against Tottenham and then walked out of Old Trafford altogether.

The five-time Ballon d’Or winner was removed from the Dutchman’s squad for the game against Chelsea but was reinstated soon after in the Europa League against Sheriff Tiraspol.

Top 100 greatest footballers revealed with Cristiano Ronaldo third, Pele fourth and Neymar not on list at all