The Red Devils added defender Tyrell Malacia to their squad last week in a £13million deal from Feyenoord.

Now Ten Hag is desperate to add Barcelona’s Dutch midfielder to his ranks at Old Trafford.

United have been chasing the star all summer – but they have run into a number of issues in trying to get the deal over the line.

Chief executive Richard Arnold and football director John Murtough have been spotted in Barcelona this week.

And they hope to finally get all of the issues surrounding the transfer sorted so that the ex-Ajax man can link-up with United on their pre-season tour of Thailand and Australia. 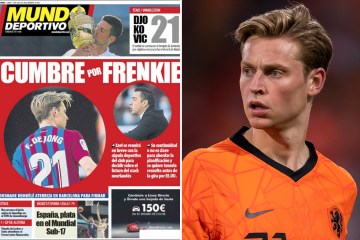 Here’s a list of the problems that have held up the move so far:

It was reported earlier this month that an agreement worth £56.2million for the midfielder had been agreed – only for that to be rubbished by Barca president Joan Laporta.

A fee of £55m has now been settled on – but those are not the only financial issues causing a delay.

There is a major sticking point over backdated wages.

De Jong agreed to a wage reduction during the pandemic to help cash-strapped Barca and is owed £24m.

They want United to pay it but the Old Trafford board are adamant they will not.

Barca manager Xavi does not want to lose the ace from his squad.

He will speak with club chiefs to determine whether De Jong is an essential player for the team over the coming days.

And the Spaniard will then relay that message to the player when he arrives for training.

Former Barca boss and fellow Dutchman Ronald Koeman has claimed that he has spoken to the 25-year-old over his future and says he informed him that he wanted to stay at the Nou Camp.

Mundo Deportivo says that De Jong held talks with Barca today when he arrived for pre-season training and that he remains adamant that he does not want to leave.

It has been said that he has told friends and family of his desire to remain in Catalonia, where he has just bought a house in Pedralbes.

UTD ARE A SHAMBLES

De Jong is only likely to depart for a team in the Champions League, and with United to feature in the Europa League next season, a switch to Old Trafford seems unlikely.

Despite Ten Hag’s arrival in the dug-out, they are struggling to get transfer signings over the line to bolster their squad.

And the combination of the two above factors have led to superstar forward Cristiano Ronaldo asking to leave United.