FURIOUS Manchester United supporters let their team have it big time before Cristiano Ronaldo rescued them against Norwich.

The Red Devils threw away a two-goal lead against the basement boys but still managed to claim the points thanks to the Portuguese legend.

After netting both first half goals, the 37-year-old grabbed his hat-trick with a brilliant free-kick late on.

But the mood had turned sour prior to that moment of magic after Kieran Dowell and Teemu Pukki levelled it up with quickfire strikes either side of the break.

A large group of disgruntled fans at Old Trafford started to chant: “You’re not fit to wear the shirt.” 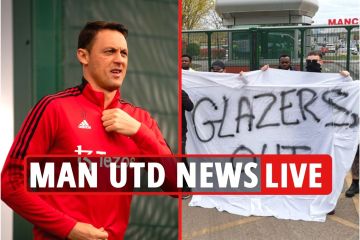 The French World Cup winner, who is out of contract in the summer, was replaced by Juan Mata off the bench just moments before Ronaldo’s winner.

Amid the toxic atmosphere, Pogba’s name was greeted by loud cheers before he was booed as he neared the touchline.

And that was followed afterwards by chants of: “F*** off Pogba!”

Prior to kick-off, thousands of United fans could be heard singing the vile chant “Joe Glazer’s gonna die” as they marched through the streets calling for the owners and board to leave the club.

The Red Devils supporters came out in force for the protest, which also saw a number of them continue it outside following the game starting.

The supporters want to see a major restructuring at board level in a bid to begin improving results on the pitch.

And one fan told The Mail: “We just want to highlight what’s happening. We want people to know this is not a good club.

“What the transfers do is to make the share price go up or attract sponsors.

“They are not football people. We are not even close. It’s a shambles.”