GABRIEL MARTINELLI has delivered the news that all Arsenal fans want to hear by declaring that his long-term future remains at the Emirates.

The brilliant Brazilian international has emerged as one of the hottest young players in world football since being called “the talent of the century” by Liverpool boss Jurgen Klopp.

And after ripping Klopp’s defence to shreds during Sunday’s thrilling 3-2 win, Martinelli declared: “Of course I want to stay at Arsenal.”

That will be music to the ears of manager Mikel Arteta, who is desperate to secure Martinelli’s signature on a lengthy new contract.

Arsenal paid just £6million to sign the 21-year-old forward from Brazilian minnows Ituano in 2019 but know his value has rocketed in the past year.

His current deal expires in 2024 and though there is an option for the club to extend that by another year they want to reward the 21-year-old’s performance with a lucrative pay rise to keep him out of the clutches of envious rivals. 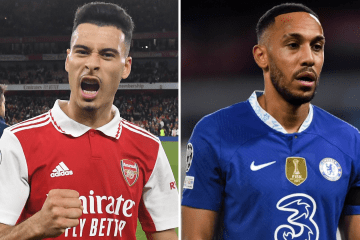 Martinelli confirms: “We are talking about a contract so let’s see what happens. But of course I want to stay.

“I think this is my best season at Arsenal and I am so happy for this moment.

“Everyone can see our hunger and our mentality. We want to win every single game.

“I am so happy to be playing alongside players like Gabriel Jesus and Bukayo Saka.

“You can see the understanding we have together but we have a lot of time to improve. We have great quality and I think we can do more.

“Gabby is a great guy, not just on the pitch but off it as well. He is always trying to help me. He is only 25 but he has a lot of experience and everyone loves him.

“It’s an amazing opportunity to be at a big club like Arsenal with so many good players.

“Of course we dream about winning the title, but we leave all that talk to our fans. We are only thinking about the next game and trying to win again.”

It was Martinelli’s first minute goal which set Arsenal on their way to arguably their biggest win of the season on Sunday as they regained their place at the top of the table.

The Gunners remain a point clear of Champions Manchester City and already 14 points ahead of a Liverpool team who finished 23 points above them last season.

“It was an amazing atmosphere in the dressing-room after Sunday’s game,” Martinelli says.

“Everyone was hugging each other because we all knew that it was going to be such a tough game but we deserved the victory and we are all so happy.”