Genshin Impact version 2.5 will be released on February 16, 2022 and players will soon be able to pre-install the update. This is a unique feature to improve the gaming experience of travelers, as they can save their time by pre-installing some of the upcoming resources.

The pre-install feature will be available for players on mobile and PC platforms on February 14, 2022 at 11:00 (UTC+8). Naturally, the feature will be live until version 2.5 update drops.

Here’s how players can pre-install the next major update in Genshin Impact on mobile and PC .

How to pre-install Genshin Impact version 2.5 on Andoird and iOS devices

Android and iOS players can pre-install the update in two simple ways:

Another option is to tap on the ‘Pre-install Resource Package’ icon located in the bottom-left corner of the ‘Tap to begin’ screen. It is important to reiterate that this icon won’t be available at the moment and will arrive on February 14, 2022.

Even after pre-installing these resources, mobile players will have to download the remaining update on February 16. They can do so by simply visiting their respective App Stores and tap on the ‘update’ option.

How to pre-install Genshin Impact version 2.5 on PC

Before pre-installing the resources, players on PC will have to update their launcher. After updating the launcher, a ‘Game Pre-Installation’ icon will appear beside the Launch button.

Luckily, PC players can enjoy the game even during the pre-installation procedure. However, it will be unavailable for Android and iOS players. 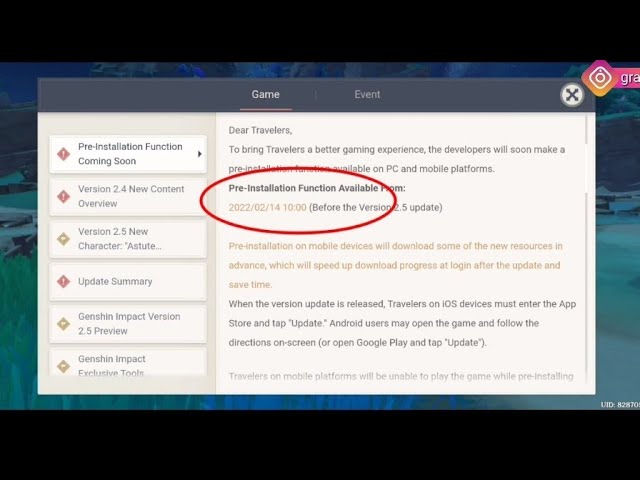 A major concern for mobile players after every update is storage. The title gets significantly larger with a new patch as regions, characters, quests, and events are added. The developers might have to introduce some storage optimization features soon, or it would be impossible to run the game on a majority of devices.

As of now, version 2.4 is live and players can try to get their hands on Ganyu and Zhongli. With the next update, Yae Miko will arrive in the first half followed by Raiden Shogun and Kokomi in the second half.

Carlos Ulberg has lived many lives in...
NewsWeekPRO