GERARD PIQUE hilariously asked Sergio Busquets to untie a knot in the laces of his boot.

That’s after being completely unprepared when called on as a sub for Barcelona.

The Catalans kept the pressure on rivals Real Madrid with a 1-0 win over Valencia on Saturday.

Robert Lewandowski scored in the 93rd minute to take his side one point behind the defending champs.

But there was a comical moment 15 minutes from time when Jules Kounde went down injured.

The Frenchman, signed from Sevilla over the summer, could not continue as he struggled with a muscle problem. 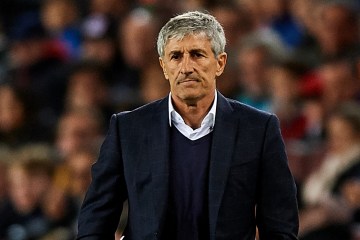 And Xavi Hernandez immediately signalled for veteran defender Pique to come on in Kounde’s place.

But the Spaniard was far from ready to make the leap from bench to pitch.

As it became clear Kounde was coming off, Pique was still sat down wearing flip-flops, as well as no socks or shin pads.

He slowly began to get himself ready when it was clear he was needed.

But with so many things to do, Pique called upon pal Busquets to help untie a knot in his boot laces.

Commenting after the game, boss Xavi said: “Pique was not wearing boots nor shin guards because he didn’t expect to come on.

“He had no time to warm up either.”

It’s not the first time Pique has taken a casual approach to a game this season.

He came under fire from fans earlier this month for a “shameless” warm-up against Villarreal.

Meanwhile, reports in Spain claim Pique may not be at Barcelona for much longer.

It’s reckoned the Catalans are in talks with him and veteran left-back Jordi Alba to terminate their deals in January.

The pair are still owed £125MILLION between them on their remaining deals.

But Barca hope to negotiate a lower pay-off in order to free up their wage bill for more signings.

George Foreman names top ten heavyweights of all time, but there’s no room for Fury as Lennox Lewis beats Tyson – The Sun