HARLEY BENN’S fight with Faizan Anwar on Floyd Mayweather’s undercard has been AXED with just hours before the first bell.

The pair were due to fight for a WBC Middle Eastern title belt at the Coca-Cola Arena in Dubai.

But just a matter of hours beforehand, the fight was scrapped live on air.

Global Titans revealed an altercation at the fighter hotel forced the bout to be canceled.

A statement read: “Faizan Anwar pulled out just hours before his scheduled fight with Harley Benn, without notice or prior warning.

“Despite multiple attempts to find a suitable replacement at short notice for Harley, Global Titans were sadly unable to do so due to those available being too heavy in weight. 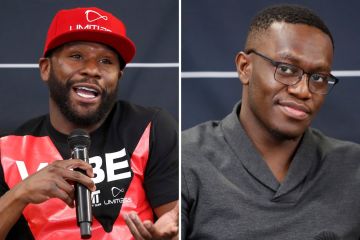 “Harley has been paid his full purse and will be fighting on a future Global Titans card early next year.”

It is the latest blow in the show, after Tommy Fury’s fight with Paul Bamba, 33, was also cancelled.

Fury has also confirmed he WILL still fight – facing Rolly Lambert in an exhibition – and denied failing to make weight.

He said online: “I just want to come on here and clear a few things up.

Why is Ryan Giggs not Wales manager at the 2022 World Cup?