JAKE PAUL has been backed to reach the pinnacle of boxing by his prodigy Ashton Sylve, who was left in shock by his celebrity manager.

Sylve is 8-0 with a 100 per cent knockout ratio and a target of almost every promoter by the time he was just 18.

But Paul and his Most Valuable Promotions stable managed to snap up the exciting American prospect.

The pair trained together briefly after Sylve took a trip to the YouTuber-turned boxer’s Puerto Rico training base.

And it was there he was left pleasantly surprised by his Paul’s boxing knowledge, which he thinks will be enough to take the 5-0 prizefighter all the way. 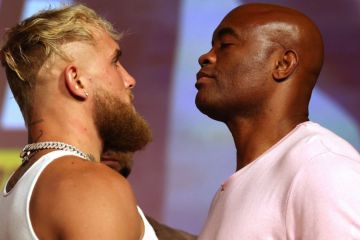 “Just talking to him, honestly I didn’t think he’d be that smart in boxing, just listening to the things he says, he’s picking things up pretty quick.

“He’s advancing in the sport and I feel like he can take it all the way and end up being world champion.”

Sylve, who has mutual famous friends to Paul’s, admits as first he was unsure about the social media sensation’s legitimacy in the sport.

But after Paul knocked out a pair of former MMA champions in Ben Askren, 38, and Tyron Woodley, 40, the teen talent was convinced.

Sylve said: “I just thought it was pretty much entertainment, something fun coming to the boxing fight, like in basketball they do celebrity games.

“But then I started to think everybody else’s career is kind of like that, a lot of fighters fight people in their first five fights who shouldn’t even be in the ring.

“So I didn’t think it was too bad and it started bringing a lot of eyes to boxing, so it was a plus for the whole boxing scene.”

Paul returns over the weekend in Arizona against Anderson Silva, 47, the biggest test of his career.

And it has also afforded Sylve a prime time spot as chief support in a bout against Braulio Rodriguez, 34.

Sylve was due to have his coming out party in August at New York’s Iconic Madison Square Garden.

But Paul had to axe his own pay-per-view bill after Tommy Fury, 23, and Hasim Rahman Jr, 31, pulled out due to a US visa issue and weight row.

So Sylve has had to share the agonising wait alongside Paul and remain calm under the chaos.

He said: “I’m grateful for the opportunity, this is kind of like a dream come true, something I always envisioned.

“In my ninth fight being a co-main event in a pay-per-view, I don’t think too many other people have done that.