‘He cannot compare to us’

THOMAS TUCHEL has told Mikel Arteta to pipe down after moaning about Arsenal’s fixture pile-up – with Chelsea having played 16 MORE matches this season.

The Gunners boss recently vented his frustration after his side were forced to play three games inside a week with this rearranged game.

But Tuchel laughed off Arteta’s moaning with Chelsea having played 54 games this season in all competitions, compared to Arsenal’s 38.

Ahead of Wednesday night’s clash, Tuchel said: “He must have reasons if he felt this way – but he also cannot compare to us in minutes.

“We can use it as an excuse, they can use it. You use the situation how you want.

“You can use it to feel tired and say we feel the challenge mentally and physically. 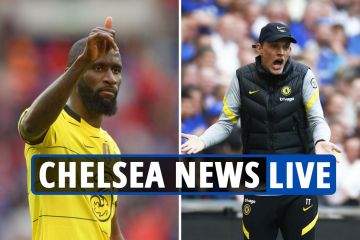 “And from there it is a given to be used as an excuse if things go wrong.

Tuchel continued: “I was not happy when Tottenham went out of the Europa Conference League…

“I know what Antonio Conte can do with teams when they are focused and he can train them physically.

“The same for Arsenal when they went out of the FA Cup.

“This would be a huge boost for them because they have a very young and talented team, to focus on one thing can be an advantage.”

Blues midfielder Mateo Kovacic is out with an ankle injury picked up in Sunday’s 2-0 win over Crystal Palace, which earned Chelsea a third FA Cup final in a row.

Jorginho and N’Golo Kante are likely to start together in midfield in the Croatian’s absence.

Meanwhile, Tuchel has revealed Romelu Lukaku can still be a “crucial player” despite his recent woes in a hint he could start at Stamford Bridge.

But the Blues will play in front of at least 10,000 empty seats as the sanctions against the club kick in.

Jorge Masvidal may currently be dealing with some outside-of-the-cage issues, but Stephen Thompson is hoping when that’s...
Champions League