The out-of-form full-back was brutally exposed at the Emirates yesterday as the Reds fell to a 3-2 defeat against Arsenal.

Alexander-Arnold came off at half-time with injury but struggled to get to grips with the speed of Arsenal’s attacks down the flanks during the first-half.

He was arguably culpable for both of the Gunner’s first half-goals as Liverpool conceded at both the beginning and the end of the 45.

His performance comes after previously poor outings this season and raging debate about whether he should be in Gareth Southgate’s England squad for the World Cup. 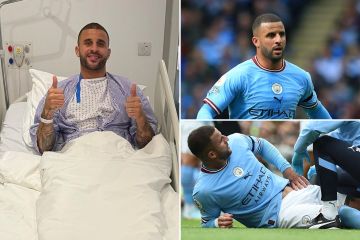 He said: “Can we talk about how bad Liverpool are defensively? They are an absolute shambles. It’s Mickey Mouse.

“Teams know they can get at Trent and aim for him every single time they get the ball.

“If I were playing now and playing against Liverpool, the first thing the manager would be saying to you is ‘get the ball out left’. Get him one-on-one with Trent because he’s League 1 [defensively] but he’s Champions League going forward.”

Woods hit back and insisted “he’s not a League 1 defender.”

Woods continued to argue that the “League 1 tag” was harsh.

It’s been a difficult season for the England international who has faced more scrutiny than ever over his defending.

Questions were raised on the opening weekend of the season when Liverpool drew at Fulham as Aleksandar Mitrovic scored at the back post, with Alexander-Arnold failing to hold off the striker.

The 24-year-old also found himself being twisted inside and out earlier this month by Leandro Trossard as Liverpool drew 3-3 with Brighton.

Jurgen Klopp said yesterday that Alexander-Arnold will require a scan on his ankle after his injury, which could place a potential World Cup place in further peril.

‘I hated it!’ – Thierry Henry says Mbappe needs to put the team first as he opens up on tough time at Barcelona