But Middlesbrough and Millwall will have another season in the second tier after missing out on the top six.

Look away Ørjan Nyland…It’s a gift for #LTFC and Harry Cornick gives his side the lead just before half-time! 💥 pic.twitter.com/6daqgMPnCh

Royal stopper Norland looked pretty comfortable on the stroke of half-time with the ball safely in his hands.

But rather than kicking it upfield directly, he rolled it out in front before going to clear it long.

However, Nyland was completely unaware of Luton striker Harry Cornick sneakily waiting behind him.

And the Hatters forward ran in front to nick the ball off the Norwegian stopper. 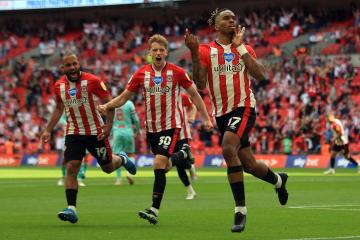 His first touch failed to get the ball out of his feet but he recovered to knock it across the edge of the area at the second attempt.

With his third touch, Cornick rolled into an empty net for his 12th goal of his Championship season – and one of his most important ever.

Nyland did recover with a flying save to tip the ball on to the bar just after the break – but fans on social media would not let him forget the hilarious gaffe.

One fan joked: “Taxi for Nyland.”

Another added: “An absolute classic.”

And a final user quipped: “Orjan Nyland, pull your pants up!”

Nyland’s blunder brought back flashbacks to Shay Given’s howler in 1998 that saw him dubbed “the only Irishman who doesn’t know where Dublin is”.

In similar fashion, then-Newcastle stopper Given rolled the ball out – only for Coventry striker Dion Dublin to dispossess him and slide the ball in with one touch.

Cheeky Carlisle striker Hallam Hope did the same against Notts County in 2019.

The Cornick goal put Luton 1-0 up at Kenilworth Road, and they held on after seven minutes of injury time to book their spot in the play-offs.

Nathan Jones’ side started the day in sixth with Sheffield United fifth and Middlesbrough and Millwall both hoping to pounce if either slipped up.

The Blades stuffed champions Fulham 4-0 at home to stay fifth.

But ten-man Boro, who would have sneaked in with a win if Reading equalised, were thumped 4-1 at Preston.

And Millwall struggled to break the deadlock against promoted Bournemouth, who grabbed a late winner through Kieffer Moore.