The social media sensation rose to fame as the younger brother of KSI, one of the most recognised faces on the internet.

But Deji – full name Oladeji Daniel Olatunji – carved out a career for himself with over 16.2MILLION followers and subscribers.

It was a family affair as he faced Paul’s brother Jake in the co-headliner, losing by stoppage.

As the world of influencer boxing grew, it was inevitable that Deji would be back in the ring again. 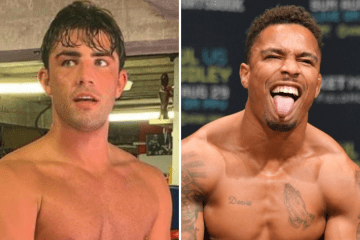 And that came in June 2021, during a YouTube vs TikTok event which saw him fight Vinnie Hacker, 20.

But after ballooning up to over 14 stone for the fight, Deji was stopped in two rounds, quitting on his feet.

Afterwards, he tweeted: “I’m sorry, I am a failure.”

It set up a comeback fight greater than ever, as Deji, 25, claimed he would walk away from boxing if he lost to Alex Wassabi, 32, in March.

Unfortunately, it was a similar story as Wassabi ran out the victor following a close points decision.

Deji’s first sign of resilience came in his emotional post-fight speech, in which he told his adoring fans he would not quit.

He said: “If you guys want me to fight again, I’ll show you what I can do.”

Deji added more muscle to his team with the addition of esteemed strength and conditioning coach Leon Wills.

And together with boxing trainer Perales, they helped shape a new and improved Deji, who returned against online rival Fousey, 32.

Deji’s improvement in his skills, fitness and mindset was there for all to see as he dropped and stopped Fousey in three rounds.

He said after winning his first fight: “I have the best team ever. I have Daley, the best boxing coach ever, ever.

“I have Leon, the best PT in the game and I have everyone out there showing their love. And that brought me out.”

The YouTube scene stood up and took notice of Deji, but little did he know the win would capture the attention of boxing greatness.

And they were seeking out competition for his first exhibition bout under their banner.

Manager Liam Chivers, who works with a host of influencer talent, was approached to put forward some names.

At the top of his list were Deji and AnEsonGib, who was a week away from his eventual win over Austin McBroom.

Due to Gib’s upcoming bout, it was Deji who was put forward and later approved by Mayweather’s team.

A deal was wrapped up within two weeks, setting the scene for one of boxing’s most extraordinary bouts.

The pair will share the ring over eight rounds in Dubai on Sunday night.

And in a career in which has seen Deji always put so much on the line, this is his first fight where he truly has nothing to lose.

Who is Anna Woolhouse? Presenter and face of Sky Sports boxing coverage – profile for Usyk vs Joshua 2 host – The Sun

Football has put two-fingers up to Putin’s Russian invasion of Ukraine, the restart of their league is a huge moment