MANCHESTER CITY are lining up a sensational move for free agent Paul Pogba this summer.

Pogba, 29, is poised to leave neighbours United later this month after a disappointing six year spell.

The French World Cup winner has turned down all attempts to keep him at Old Trafford.

And Haaland, 21, is heavily linked with a transfer to Pep Guardiola’s side.

BILD claim that the Norwegian international is “set to move” to Manchester City.

Reports from the Daily Mail suggest the striker has agreed personal terms with in a deal that could be worth up to £100million. 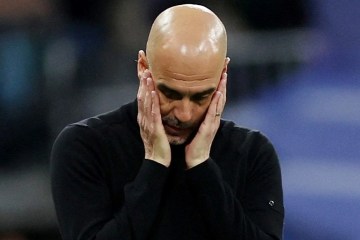 Villareal centre-back Pau Torres has received interest from both cross-city rivals in Manchester.

If the champions win the race for the Spanish international, he could slot into the back four.

The end of this season appears the most likely time for his release clause of around £50million to be triggered.

Frenkie de Jong is on City’s wishlist and there is talk of a swap deal for Bernardo Silva.

Guardiola’s admiration for Barcelona’s De Jong is well known and he could alternatively be sold for cash as the Catalan club look to slash their debts.

Alternatively, the City boss could bring in Grealish and Alvarez on the wings as he likes to chop and change throughout the season.

Argentine forward Julian Alvarez is already coming to Man City in the summer as a £14million switch from River Plate was agreed in January.

Tyrick Mitchell could fill in at left-back to replace Joao Cancelo.

The left-back, 22, has had a stellar season at Crystal Palace and was rewarded by a late call-up to Gareth Southgate’s senior side in March.

Man City are in the market for a new left-back and are keeping track of the youngster’s progress, as are Chelsea, Newcastle and Tottenham.

Cristiano Ronaldo not allowed to change the lightbulbs at home in case he injures himself, reveals Georgina Rodriguez

JOAO PALHINHA is set to complete his £17m move...

ARSENAL new boy Fabio Vieira has picked up an...
NewsWeekPRO

JOAO PALHINHA is set to complete his £17m move...