The Red Devils are set to welcome in a new era with the Dutchman as they test themselves against Jurgen Klopp’s outfit.

The match is taking place in Thailand and Man Utd striker Cristiano Ronaldo has not made the trip out there with the rest of the squad after confirming to the club his desire to leave this summer.

But Ten Hag still has a host of big names to choose from ahead of his first game in charge.

Club captain Harry Maguire was training on his own on Sunday, so it is not yet known whether he will be fit enough to start the match. 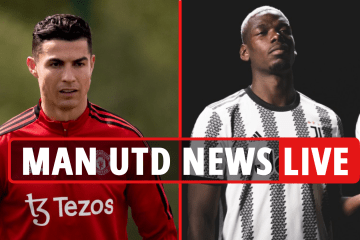 In midfield, Ten Hag could go with the experience of Scott McTominay and Donny van de Beek – who he guided to the Champions League semi-finals while at Ajax.

Behind the striker, the pace and dynamism of Anthony Elanga, Bruno Fernandes and Jadon Sancho will attempt to cause problems for the Liverpool defence.

And in the absence of Ronaldo, Marcus Rashford looks set to lead the line.

However, there is also the possibility that Ten Hag uses this game to check out some of his fringe players.

Tom Heaton could be preferred to De Gea in between the sticks, with the England duo of Maguire and Luke Shaw potentially coming back into the fold.

Aaron Wan-Bissaka is another option at right-back, but it is the central midfield where Ten Hag can really get a look at his academy prospects.

Charlie Savage, son of former Wales international Robbie Savage, and Zidane Iqbal have both made the trip to Thailand.

And they may well be given their chance in what would be their first minutes in the team since they made their debuts off the bench back in December.

Fred may also be picked ahead of McTominay, while another youngster could join Elanga and Sancho up top in the form of Facundo Pellistri.

CHELSEA have reportedly been given a major boost in...

ANTHONY GORDON has come a long way from Kirkdale,...

MANCHESTER UNITED are lining up a transfer for Thomas...

TOTTENHAM fans trolled Mikel Arteta's All or Nothing rant...
NFTNews