How old are Cristiano Ronaldo’s twins?

CRISTIANO RONALDO is a father to five children.

The Man Utd star and six-time Ballon D’Or winner shares two daughters with girlfriend Georgina Rodriguez and also has a son and twins.

How old are Cristiano Ronaldo’s twins?

Cristiano Ronaldo announced that he became the father to twins Eva and Matteo in 2017 making them four years old.

The Portugal captain at the Confederations Cups that year announced that he then became a father of three after Portugal’s elimination from the tournament.

He stayed with the national team throughout the whole campaign.

Cristiano made it official on his Facebook account saying: “I was with the national team, giving my everything as always, despite knowing my children had been born. 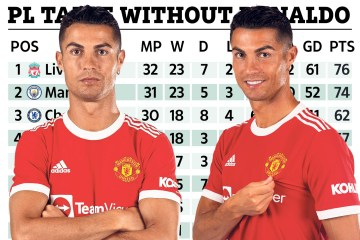 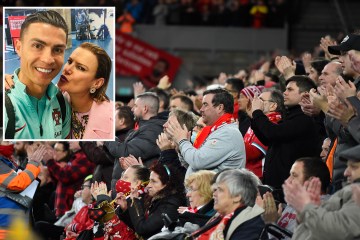 “Unfortunately, we couldn’t reach our main sporting objective, but I am certain we will continue to make the Portuguese people happy.

“The President of the Portuguese Football Federation and the national team manager were considerate towards me and it is something which I will never forget.

“I am very happy to finally be with my children for the first time.”

The national team showed their gratitude in an official statement saying: “The President of the Portuguese Football Association and the manager were informed before the Confederations Cup that the national captain Cristiano Ronaldo had become a father.

“The player, despite knowing about the birth of his children, decided to stay with the national team, which is a gesture we want to highlight.

“The President of the Portuguese Football Association and the manager, understand that, having failed to win the Confederations Cup, we had to release the player so that he could finally go and meet his children.”

This was not the first time that Ronaldo was competing at a major international tournament at the time of birth of his children.

In 2010, he was playing for Portugal in the World Cup in South Africa against Latvia at the time of birth of his eldest son, Cristiano Ronaldo Jr., who’s now 11.

The identity of his mother is unknown and Ronaldo Sr says he will never reveal it to the public.

Later on, in 2017, Ronaldo confirmed in an interview that he and his girlfriend Georgina were expecting their first child together.

On November 12 of that year, Georgina gave birth to Alana Martina and Ronaldo became a father of four.

In October 2021, Cristiano and Georgina announced to the world that they were expecting twins, a boy and a girl.

Sadly, on April 18, 2022, the couple announced on their social media that their newborn son passed away.

Who is Matteo and Eva’s mum?

It was reported that the twins were given birth from a surrogate mother in the United States.

A surrogate mother is when a woman carries and gives birth to another person’s baby.

During their birth, there was speculation that Cristiano Ronaldo’s mother, Dolores Aveiro, was flying over to collect the twins from the hospital.

She had previously collected Ronaldo Jr. from the hospital too in 2010 when Cristiano was playing for Portugal in the World Cup in South Africa.

This was revealed in her approved biography, published in July 2014.

Although three of Cristiano’s children are not Georgina’s, she accepted to raise them as if they were her own.

The couple often share photos of themselves as a family on social media, while Georgina even posts pictures of herself with the children while Ronaldo is away for football duties.

In her Netflix docu-series, she spoke about how they all call her mum and how the couple choose to raise the children together.

They made a decision to limit the children’s access to technology as much as they can and entertain them with traditional childhood games such as beads and playing kitchen.

Georgina admitted that they “paint and dance a lot” and when the kids “are very restless and won’t stop, I put on Angel Corella’s Swan Lake.”

Former Liverpool star Steve McManaman believes it will be almost impossible for clubs like Bayern Munich to sign Sadio...
Sport