How to complete the TOTY Challenge 7 SBC in FUT 22

FIFA 22 has continued to release several single task SBCs under the Team of the Year promo and the latest one is the seventh TOTY Challenge.

The TOTY promo has been a massive success this year as expected. The overall supply of cards has been more which allows more players to enjoy the special cards. These special cards represent the best footballers who outdid their fellow peers over the last year.

TOTY cards normally have a very low chance although they’re available in almost every pack. The TOTY Challenge 7 SBC, on the other hand, is a simple challenge that players can do quite easily. As a bonus, they will also be able to earn Future Stars tokens that can be used in the Future Swaps program later.

Tasks, costs, and rewards of the TOTY Challenge 7 SBC in FIFA 22 Ultimate Team

Tasks of the SBC

The TOTY Challenge 7 SBC will cost between 5,500-6,500 FUT coins depending on the platform. Players should also aim to spend as much fodder as possible to reduce the price. 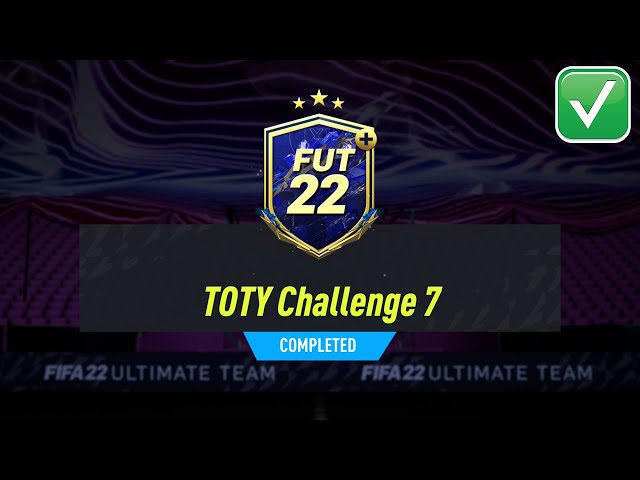 The TOTY Challenge 7 SBC is live in the game for 48 hours and can be done only once. There are plenty of different ways to solve the SBC so players should optimize it considering the fodder they have.

The TOTY Challenge 7 SBC rewards players with 1 Electrum Players Pack which is definitely worth more than the price of completion. To make the deal even sweeter, players will also earn one token to be used later in the Future Swaps program. The Future Swaps program looks to be an interesting one with several valuable rewards available to players.

The TOTY Challenge 7 SBC on its own is good enough for every player to complete it. Every pack now earns as a statistical odd of giving a TOTY item, albeit the chances of it being really low. At such low costs and high potential rewards, it’s always useful for the players to complete these SBCs.