How to obtain the Sword of St. Trina in Elden Ring

Elden Ring has many utility weapons to pick from, making exploring certain areas of the Lands Between and particular boss fights significantly easier to deal with. One such weapon is the Sword of St. Trina, which can put enemies to sleep with its unique weapon art, opening them up for a Critical Strike.

The sword’s Ash of War, known as the Mists of Slumber, allows the wielder to release a frontward sweeping purple mist, putting the sleep status ailment on the targets hit.

Additionally, after using the skill, the weapon’s blade itself will also be quoted with a Soporific Grease for a short time, and hitting enemies with it (even when they are behind a shield) will put them to sleep after enough strikes.

While there are some elite mobs and bosses that the effect will not work on, the Sword of St. Trina is still a very effective weapon for various encounters and is quite highly coveted by many.

Unfortunately, many in the Elden Ring community are having a tough time getting their hands on the sword. Hopefully, today’s guide will be able to help them out with it.

Obtaining the Sword of St. Trina in Elden Ring

The Sword of St. Trina is highly coveted because the Elden Ring Tarnished will be able to get their hands on it very early on in the game. The weapon is present within northwestern Caelid, in the crypt known as the Forsaken Ruins.

Players are not required to get past any hard boss or defeat an elite enemy to get to the sword, making it one of the most straightforward utility items they will encounter as they drop into Limgrave in the new game.

Hence, to get their hands on the Sword of St. Trina, players will need to, 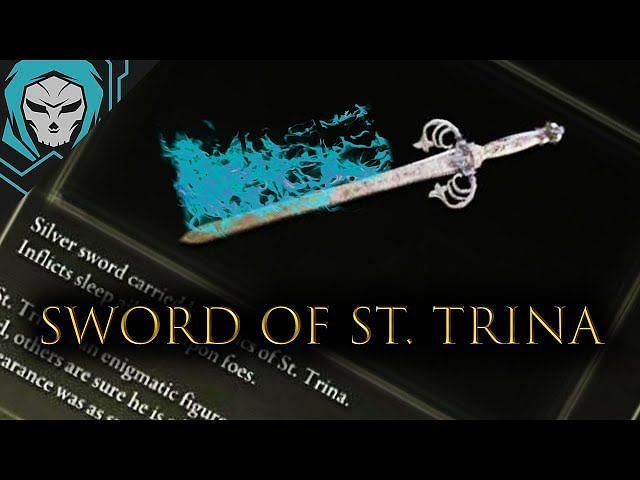 With 10 Strength, 12 Dexterity, and 14 Intelligence requirements, the sword fits those players perfectly who are putting Runes into both Dexterity and Intelligence. The sword’s Ash of War, Mists of Slumber, makes the weapon very effective in some of the more difficult encounters in the game, as it can make exploring the Lands Between significantly easier.

While sleep buildup is quite effective for many enemies in Elden Ring, it will not be effective against some of the bosses and elite enemies. However, for enemies such as Leonine Misbegotten and Margit the Fell Omen, the Ash of War can be very useful.