Hydrological Investigation in The Chasm is a short quest introduced in Genshin Impact 2.6 that rewards players with 30 Primogems upon completion.

Given how easy it is, some Travelers will inevitably rush to participate. The main objectives of the quest are as follows:

Travelers can easily complete Hydrological Investigation in The Chasm in a few minutes, although unlocking it can seem tricky to some casual players. If players struggle to defeat the Hydro Geovishap, they can always lower the World Level.

Genshin Impact quest guide: How to complete Hydrological Investigation in The Chasm

Travelers need to fish in the Underground Waterway to start this quest. Beware of the nearby Shadowy Husk enemies because they will have to be dealt with if the player draws their aggression before they can fish. The fishing spot is on the west side of this tiny island.

Catch any fish here and leave the fishing mini-game. Players should automatically receive a Strange Object. Once they obtain this item, they should return to Khedive near The Glowing Narrows.

Note: There is a Teleport Waypoint nearby.

Starting Hydrological Investigation in The Chasm 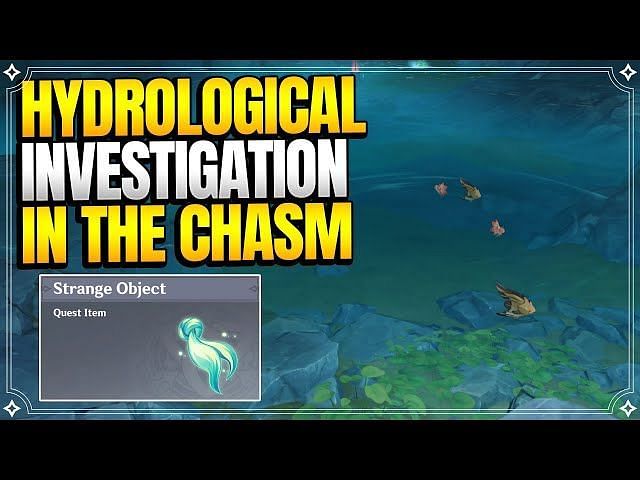 Once Genshin Impact players talk to Khedive, they must select the “About the strange object…” option. After some dialogue, the player will be instructed to “place the strange object” by the water. Thankfully, this spot is marked on the map for the Traveler.

Once players get to the spot (north of the Underground Waterway), they will have to approach the yellow glow and select “Place” to get a new objective.

The next task requires the player to use any Hydro character to attack this spot. Once players do that, they will fight a Hydro Geovishap. Players should defeat it, return to Khedive, and select the “About the strange object by the water…” option.

After some dialogue, players will be officially done with Hydrological Investigation in The Chasm. They should now receive 30 Primogems, which they can either use on the current ongoing banners or save for something else in the future.

MJF's behavior ahead of AEW Double or Nothing tomorrow has been deemed unprofessional as per reports. The Salt of the...
Football